In urticaria, also known as hives or nettle rash, itchy wheals form on the skin as on contact with stinging nettles. 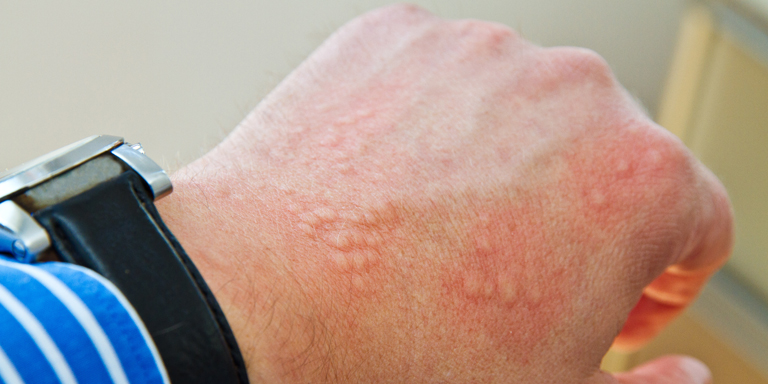 About one in every five people will suffer from urticaria at some point in their lives. Urticaria may occur as a symptom of an allergy (to foods, insect venom, medication) or may also be triggered by infection, physical stimuli such as the cold, autoimmune processes or stress. A distinction is drawn between acute and chronic urticaria.

Hives (urticaria) is a common skin disease that can affect both adults and children. It is characterised by the formation of itchy wheals and/or angioedema (collection of fluid in the skin or mucous membranes, such as in the mouth) The wheals usually disappear within 30 minutes to 24 hours. Angioedema may last a few days. The symptoms of the disease vary depending on the type or subtype, which can also occur in combination.

Urticaria is predominantly triggered by the activation of mast cells, which then release mediators (especially, histamine).

Allergic urticaria is rare. In this form, wheals and/or angioedema are often associated with symptoms in other organs, such as in the respiratory and gastrointestinal tracts and/or in the circulation. This can lead to anaphylactic shock in the most severe cases. The symptoms appear quickly, within a few minutes to typically no more than one hour on contact with the triggering allergen, and do not persist. They typically recur on renewed contact with the same allergen. Non-allergic, spontaneous urticaria is the most common form, its triggers are complex and varied. It is often the case that no underlying cause can be clearly identified.

Isolated urticaria is non-contagious and not dangerous in itself if no other organs are involved. However, it can impair the quality of life and capability of sufferers. Reported effects include depression, anxiety, insomnia and sexual dysfunction.

The typical symptoms of urticaria are wheals, which may or may not be accompanied by angioedema (accumulation of fluid in the tissue). Spontaneous urticaria often affects any part of the body, whereas inducible urticaria generally affects only those areas that have come into contact with the relevant trigger, provoking the reaction.

Wheals are well demarcated, surface swellings of the skin, which vary in size and form. The swellings are typically surrounded by redness and accompanied by itching. They usually disappear by themselves within 30 minutes to 24 hours.

Angioedema is a swelling of the deeper layers of the skin or the mucous membranes. It can occur with or without redness and is sometimes accompanied by tenderness and a prickling sensation. The swelling can occur anywhere on the body, but often occurs in certain areas, such as the lips and eyelids, hands, feet, arms, legs and genitalia. The swelling can persist for up to 72 hours.

In acute urticaria, wheals and/or angioedema characteristically occur for no more than six weeks. The precise causes are often hard to identify and are usually not investigated further and in greater depth, as the symptoms disappear again by themselves. If, on the other hand, it is suspected that the urticaria is allergy-induced, the attempt is made to identify the responsible allergen to avoid recurrence.

The causes of chronic spontaneous urticaria are not known in most cases. Medication, infection, inflammation and stress may trigger or exacerbate the symptoms. However, in the case of chronic spontaneous urticaria, they are not clear, as the typical symptoms such as wheals and/or angioedema are not always triggered, and the symptoms may also occur without any triggers.

Urticaria factitia: After scrubbing, scratching or under tight-fitting clothing, linear wheals form and the skin itches and burns. The wheals usually disappear within one hour.

Cold urticaria (cold contact urticaria): Wheals or angioedema form within minutes when the skin comes into contact with cold – cold air/wind, liquids or solid objects – and is then exposed to heat. The symptoms normally persist for an hour or so. In severe cases, it may result in general reactions up to and including anaphylactic shock.

Cholinergic urticaria: The skin reddens and wheals form both after physical activity/sports and after passive warming such as after a warm bath. In some sufferers, the symptoms are also triggered by emotional stress and hot, spicy dishes or drinks. They persist for between 15 and 60 minutes.

Heat urticaria (heat contact urticaria): If the skin is exposed to heat, itchy and burning wheals form within minutes. This form is very rare.

Pressure urticaria (delayed pressure urticaria): The skin swells and reddens when pressure is applied on the skin. The skin reaction occurs within 30 minutes to 12 hours, and may therefore be delayed, and can last for up to 72 hours.

Light urticaria (solar urticaria): Itchy, burning wheals form when the skin is exposed to visible and/or ultraviolet (UV) light. In most cases, the skin changes occur within a few minutes.

Aquagenic urticaria: Wheals or angioedema form within 30 minutes when the skin comes into contact with water, regardless of its temperature. This form is very rare.

Vibratory urticaria/angioedema: Skin swellings and itching develop within minutes to hours on exposure to vibration. This form is very rare.

Contact urticaria: Wheals or angioedema form within minutes (usually approx. 30 minutes) when the skin comes into contact with triggering substances, such as latex.

In acute urticaria, detailed diagnostics is not necessary, as the disease usually subsides by itself within no more than six weeks. It is only in cases where it is suspected that the urticaria is a symptom of an allergic reaction (for example, to foods, medication or insect venom) that further clarification is advisable.

In chronic urticaria, clarification is more complex. The first step is a detailed discussion with the doctor (medical history). Attendant circumstances such as any medication being taken, physical exertion, stress and travel as well as the times when the urticaria appears should be recorded as accurately as possible. Keeping a diary over a defined period can be very helpful in this respect.

In chronic spontaneous urticaria, further tests and examinations are conducted to rule out other diseases with similar symptoms and to identify possible causes and triggers.

If the medical history and physical examination indicate chronic inducible urticaria, challenge tests are conducted with the suspected trigger. In most cases, common measurement techniques allow confirmation of the diagnosis and determination of the individual threshold level for the symptoms to appear.

When urticaria is successfully treated, there are no more symptoms and quality of life is unimpaired. There are three treatment approaches that can be used separately or in combination, depending on the type and subtype:

In most cases, it is impossible to eliminate the underlying causes. In acute and chronic inducible urticaria, these are often unknown, and the most common triggers of chronic spontaneous urticaria – i.e., autoimmune processes – cannot be eliminated.

Avoidance of triggering factors, on the other hand, can play an important role in controlling urticaria. In most cases of chronic inducible urticaria, it can help reduce the frequency of symptoms. Avoidance of individual triggers can sometimes reduce symptoms even in chronic spontaneous urticaria.

Using or taking medication for urticaria has no effect on the causes but can help control the symptoms. The medicines most commonly prescribed are second-generation antihistamines, which can also be taken at high doses and over a prolonged period.

In most cases of acute urticaria, treatment with antihistamine in the form of tablets or drops is sufficient. To shorten an episode, cortisone is also sometimes used in the short term. If the skin is badly affected, it should not be irritated further by scratching, rubbing and applying pressure.

Treatment of chronic urticaria often requires patience on the part of both the sufferers and the doctor, as the precise cause often remains unknown. The primary treatment goal is to alleviate the wheals and itching. Treatment mainly involves antihistamines; they can be taken at high doses and over several weeks and months. If high doses of antihistamine are insufficient, the urticaria can also be treated with biologics. These new drugs are often antibodies that inhibit natural substances or cells in the body, and thus restrain immune overreaction. Systemic cortisone is also used for severe episodes of urticaria.

The development of tolerance can be successful in treating certain forms of chronic inducible urticaria (cold urticaria, light urticaria and cholinergic urticaria). However, this tolerance usually only lasts for a few days and the treatment – such as a cold shower every day for cold urticaria – must be repeated regularly. Sufferers often find this excessive and/or unpleasant.

Thank you for the support 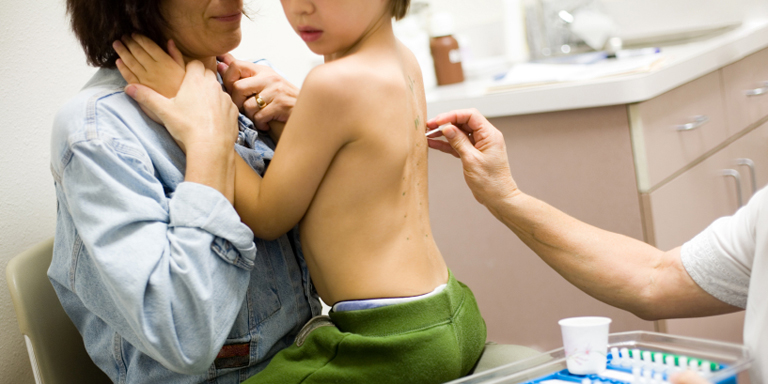 What is an allergy?

At least a quarter of the Swiss population is affected by allergies. The trend is upwards. The reasons are many and varied. Experts distinguish between allergy types.

to page What is an allergy? 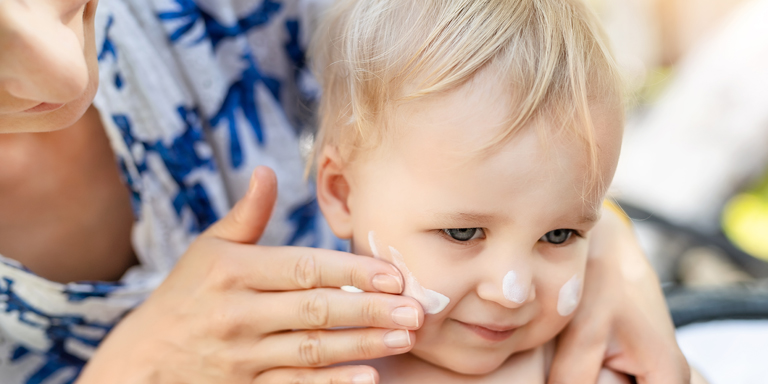 One day in the sun and the skin turns red, itches and develops a rash - despite the use of sun cream. What is happening? Could it be a sun allergy?

to page Sun allergy
© by aha! Allergiezentrum Schweiz
Last update: 24.10.2022
Site by WeServe
The aha! Swiss Allergy Centre uses cookies on its www.aha.ch website to ensure you get the best experience. To continue browsing the website, you must first consent to the use of cookies.