Animals also have to contend with pollen and other allergies. One in five dogs, for example, have an allergy or intolerance. Cats and horses may also suffer from an allergy. 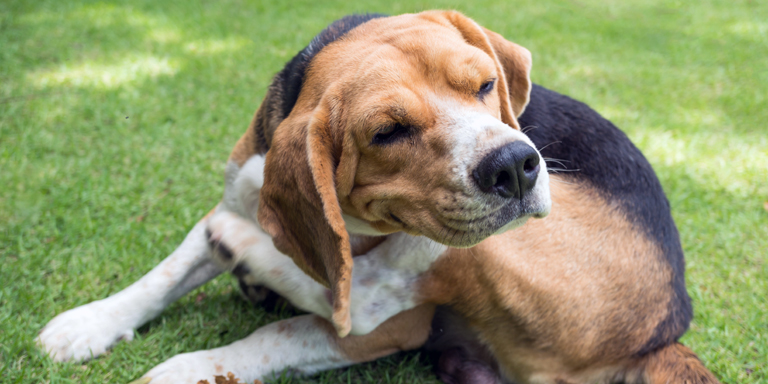 Animals have a similar range of cells, antibodies and receptors as humans. It is therefore unsurprising that they too increasingly react to pollen, house dust mites etc. However, non-allergic reactions are more common than allergies.

Like humans, animals such as dogs, horsese and cats may also suffer from different forms of allergy and non-allergic hypersensitivity reactions. How this comes about is still not fully understood. It is assumed that an interaction between genetic components and environmental factors is involved.

The main triggers of adverse reactions in dogs are:

The symptoms vary depending on the trigger. With fleas, dogs react to the flea bites or more precisely to the saliva of these tiny parasites.This causes marked itching, primarily at the base of the tail.

If the symptoms are caused by allergens in the environment, they are often seasonal. Pollen does not usually lead to runny nose but instead to canine neurodermatitis – a form of atopic eczema. It manifests as redness and itching, mostly on the ears and paws. With dogs, an allergy to mould and house dust mites can cause runny nose as well as atopic eczema.

Severe allergic reactions to dog food ingredients are rare in dogs. It is more often a case of hypersensitivity or intolerance. Typical symptoms are vomiting and/or diarrhoea but may also include skin reactions.

With a house dust mite allergy, the same measures help as with humans: vacuum clean often using a HEPA filter, wet mop the floor regularly, ventilate the home well two or three times a day for 5 to 10 minutes, cover the dog bed with an encasing ideally made with textiles that are washable at 60oC, do not let the dog enter bedrooms, as the concentration of house dust mites is at its highest in beds.

Skin and blood tests are used for the diagnosis of an allergy in dogs. In the case of an allergy to dog food, an elimination diet is followed to identify the trigger.

In the case of cats, flea bites are one of the most common triggers. Cats have a reaction to the saliva of the flea, causing skin symptoms.

Other common triggers are:

A feature peculiar to white cats: they are hypersensitive to sunlight. The ears are primarily affected. The sun can damage the thin, poorly pigmented tissue or cause the tissue to die (necrosis).

Cats react with different symptoms. The most common are:

Skin and blood tests are used for the diagnosis of an allergy in cats. In the case of an allergy to cat food, an elimination diet is followed to identify the trigger.

Horses most commonly suffer from equine asthma, which in its milder form is known as inflammatory airway disease (IAD). The mechanism underlying the disease is not yet fully understood.

Summer eczema is caused by an allergic reaction to the saliva of certain insects.

The symptoms vary depending on the disease. A typical first sign of equine asthma is occasional expectoration when first setting off. However, as the disease progresses, respiratory function is impaired, with spasmodic bouts of coughing and whitish nasal discharge and possibly respiratory distress. A pollen allergy can cause urticaria, itchy eczema and recurrent airway obstruction (heaves).

Typical symptoms of summer eczema are:

As with cats and dogs, the diagnosis of an allergy in horses is based on the presenting symptoms and by excluding other possible causes. If an allergy continues to be suspected, skin and blood tests are used. For an allergy to horse feed, an elimination diet is used to determine the trigger.

Treatment is similar to that for humans: avoid the substances that trigger the allergy to reduce exposure. If this is not possible, medication is used. In some cases, desensitisation may also help. In cases of insect venom allergy, insect repellents can be used to ward off the insects. Use can also be made of full body blankets to protect horses from the insects.

10% of all horses suffer from summer eczema.

Potentially life-threatening reactions are very rare in animals. They may be triggered by wasp and bee stings, animal feed and medication.

The first steps are taking an accurate medical history, evaluating the symptoms and excluding other possible diseases.This may be followed by skin and blood tests. If an animal feed intolerance is suspected, diagnosis is usually made using an elmination diet, which involves the removal of the suspected feed ingredient from the animal feed for a defined period.

© by aha! Allergiezentrum Schweiz
Last update: 26.02.2021
Site by WeServe
The aha! Swiss Allergy Centre uses cookies on its www.aha.ch website to ensure you get the best experience. To continue browsing the website, you must first consent to the use of cookies.